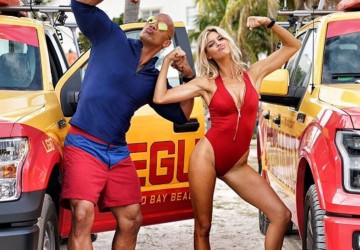 The pier, pavilion and beaches of Tybee Island attract the film industry, too. While 2010’s “The Last Song,” starring Miley Cyrus and 2015’s “Dirty Grandpa” featuring Zac Efron and Robert DeNiro used Tybee Island as a backdrop, The Baywatch movie currently being filmed on the island, appears to be a grander spectacle.

For one thing, the movie requires installing temporary dunes for an obstacle course and putting a motorcycle track on the pier for a chase scene.

For another, Dwayne, “The Rock” Johnson and Zac Efron are the stars of the film.

Among the other happenings related to this major film:

The movie is about an old-school lifeguard (Johnson) forced to team up with a young gun (Efron) to save the beach from impending doom.

Trip Tollison, president of the Savannah Economic Development Authority, said she felt the movie will have far-reaching benefits for the community.

The movie will be released in the summer of 2017.

Movie or not, you’ll love Tybee Island! There is a lot to do here from sightseeing to nature watching to watersports. And you can do it all from River’s End Campground right on the Island. Reserve a spot for your RV of any size and enjoy all Tybee has to offer at www.riversendcampground.com.